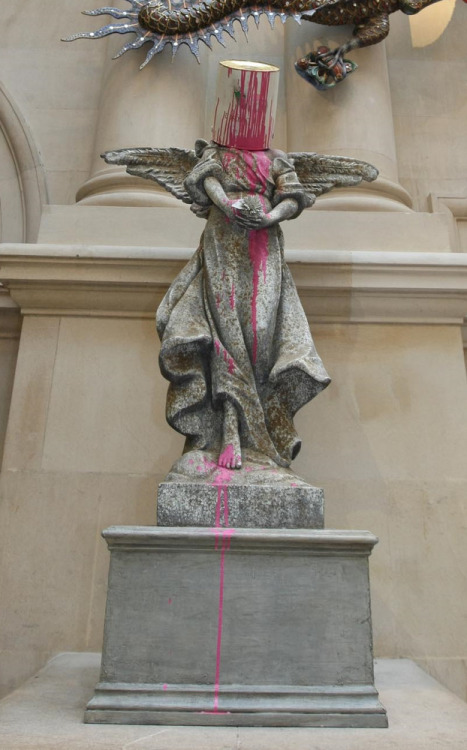 Bristol has had a love-hate relationship with Banksy since he began stencilling on the city’s walls nearly two decades ago. The “Exit Through the gift shop” exhibition (2009) was the highest profile Bristol exhibition ever and the most successful in the museum’s 190 year history. The show brought an estimated £15 million into the local economy and was noted as the first retrospective exhibition of Banksy’s work. The artist himself was involved in setting up the exhibits and participated with the museum to oversee its installation. Staff were unaware of who he was and his anonymity was never compromised, among the crew setting up the show. Although Bristol has seen work by Banksy adorn the city’s walls, this was his first official indoor exhibition in a major museum. One of the key pieces in the exhibition was a work “Pink Angel” which modifies a 19th century plaster cast of a angel. Banksy has splattered it with pink paint and placed the empty bucket over the head of the figure. This work was donated along with a model of Jerusalem carved from olive wood by Palestinian artist, Tawfiq Salsaato to the museum following the run of the exhibition. Banksy agreed to do the show at the museum for a token fee of £1, all a gift to the bithplace of this elusive artist..

This summer’s popular Beryl Cook exhibition has come to a close and the Bristol Museum & Art Gallery’s newest permanant work the Banksy angel has now become a magnet to attract people through its doors. A banner outside reads: ‘Banksy is no angel but he has left us a present. Discover his gift to Bristol inside.’ This is displayed on a bright pink canvas banner hanging outside the museum. It’s difficult to miss. Bristol’s main museum and art gallery houses an outstanding and diverse range of objects, from sea dinosaurs to important artworks. If this gets people to engage with art it is working. A visit to the region’s largest museum and art gallery is guaranteed a great day out.

The Bristol museum’s art galleries also contains masterpieces by Bellini, Cranach, Renior, Pissarro, Sisley, Bomberg, and Hepworth. In 2012 it will host a tour of ten of Leonardo da Vinci’s most iconic drawings from the Royal Collection. The exhibition forms part of the celebrations of the Diamond Jubilee of Her Majesty The Queen. The drawings have been selected from the unparalleled holdings of the Royal Library to reflect the whole range of Leonardo’s activities.